Long before Western Culture adopted the figure of Father Christmas a far more ancient divine mother was linked to the Winter Solstice: The Deer Mother or Reindeer Mother, as explored in this blog by Imelda Almqvist. After years of reading, research and shamanic work she has come to believe that this mother, carrying the returning sun in her antlers, is the original mother who gave rise to Mothers' Night, dating from the Stone Age 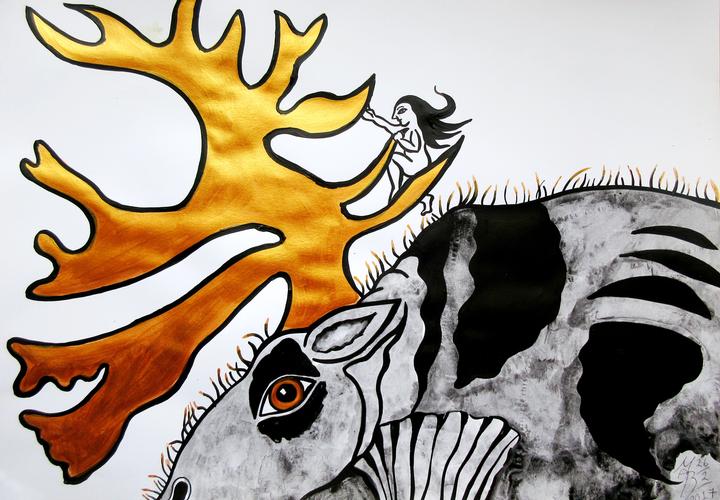 As a Dutchwoman (dividing her time between London UK, Sweden and the US)  I have been at odds with the usual Christmas celebrations for all of my life. I have always sensed deeper, darkerand richer mysteries awaiting just below the surface. I also sense a yearning for ancient stories to be told again and for ancient deities to be honoured once more.

One great life-changing event was meeting my Swedish husband (at age 19) and henceforth spending many major feast days in Scandinavia. My intuitions soon started to make more sense and acquire substance, verification.

This blog is about Modranigt or Modranight, an Anglo Saxon celebration which opened the new year. For ancient peoples, whose lives were not ruled by electronics and apps, the true new year occurs when the light returns and the days start getting longer: meaning the winter solstice.

Much preparation occurred, such as cleaning the house and making sure all animals were extremely well looked after. In Scandinavia it was viewed as quite a dangerous night, a night when trolls and gnomes drew close and watched what human beings were up to. Women put their spinning wheels away and tidied their distaffs (knowing Frau Holle, or further North Lussi, would check everything was ready for Yule). People stayed alert to The Wild Hunt in the night sky overhead as winter storms raged across the land. It was considered best to stay safely inside, brew ale or bear, light candles everywhere and to bake a large variety of Yule treats that all had symbolic shapes (such as the solar wheel or so called "Lussekatter" with two raisins, representing the eyes of Freyja's cats!)

Today there are variations in when people think Mothers’ Night ought to be celebrated. Some people (today) prefer the actual winter solstice, others say on Christmas Eve (the 24th) and again others have settled for a date in-between, such as December 22nd - possibly to give it proper attention and get away from the traditions (and expectations/demands) that Christmas Eve usually brings in our culture.

The word solstice literally refers to the sun “standing still”. Today the term solstice is used to describe the exact moment when the sun reaches its northernmost point (that is the summer solstice around June 21) or southernmost point (around December 22) from the earth’s equator. On Dec. 21, the sun stops moving southward, pauses, and then starts moving northward again. This three-day pause falls during the days between the astronomical winter solstice and our Christmas. It is a very sacred pocket of time, that sets these days aside from other days in the year. It is a very powerful time to do spiritual work (and thus get ready for the new year).

The concept of Mothers’ Night or a Night dedicated Ancestral Mothers is to honour all the women in our life (in the widest possible sense). For me this means my actual mother and grandmothers (and aunts, sisters-in-law) as well as women who played an influential role in my life or were a mentor/role model to me. It also includes the ancestors: the women I never met, who passed on their genes and features to me, who shared my passions and interests, as well as my bloodline.

This includes all the healers, witches, sibyls who passed on their shamanic skills to me. I cannot express my gratitude for this gift.

The line-up also includes the Deep Ancestors in my ancestral field whose names I do not know (and will never know). I reach out especially to women where I still feel pain or imbalance in the ancestral web. For instance: my husband’s great grandmother lost three children in one week to diphtheria before having one more child that became my husband’s grandfather – as a mother of three children I reach out to her, I honour her pain and courage. In that moment any time boundary between generation dissolves. I know that we are one, that past and future are one, that we meet in the NOW. I also extend my prayers to any women who shaped, mentored or taught me. (In ancestral healing work we speak of biological ancestors, ancestors of lineage and ancestors of affiliation).

I also honour goddesses that have a connection to home, hearth and children. This includes the Norse goddesses Frigg and Freyja, Germanic Frau Holle and Sigyn (Loki’s wife) who is a cherished teacher in my life (appearing to me as The Poison Mother!)

For me this work does not stop there. Weaving back to Christmas for a moment: I am currently working on a film (TV Project for the Smithsonian Channel with Blink Films) about the ancient site of Star Carr in Yorkshire, where many antlered head dresses were found by archaeologists. More about that soon!

What I find an astounding piece of intelligence (found in circumpolar tribes all over Northern Europe as well as Siberia and Mongolia) is that an ancient deity called The Reindeer Mother was said to carry the Sun in her antlers. The reindeer is the only deer species where the females are bigger than the males and they retain their antlers in winter. On the night of the Winter Solstice The Reindeer Mother flies up in the sky. It is likely that she set the blueprint for our “Coca Cola version of Father Christmas flying around in a carriage pulled by reindeer”. She was Mother Christmas! (Reindeer love eating fly agaric mushrooms, the red ones with the white dots. Reindeer herders were said to collect and drink their urine, as a safe way of ingesting the holy mushrooms and achieving altered states of consciousness).

I honour The Great Deer Mother especially on Mothers’ Night and ask if I may accompany her on her journey to retrieve and return the sun! I much prefer this magical mystical experience to listening to Jingle Bells in the shops.

There is a Slavic Winter Goddess called Rozhanitza. She too is depicted as having reindeer antlers (in traditional embroideries from Russia and nearby countries). She has many names and there are many stories about her, but ultimately all these stories put us in touch with a key ancestor (Native Americans would day “totem”): a great indigenous circumpolar deity. She was worshipped over a large geographical area (long before the internet existed so there was more effort involved in people learning about each other’s cultures on trade routes and so forth).

This year I will celebrate Mothers’ Night in Sweden, on Saturday night December 22nd. I will return to the cairn on my land there, which contains a figure of the Deer Mother that I carved from antler bone this summer (with a special note of thanks to master carver Rob Purday who gifted me the antler pieces!)  I will make offerings, say prayers, drum – just as I did for the Álfablót  (see my blog about that).

If this  inspired you – I invite you to honour your ancestral mothers, living women and animal totem in any way that feels right to you!

The following art videos provide an insight into how I work with these ancient beings:

Frau Holle: The Wild Hunt of Frau Holle and her Heimchen

Sigyn: in her manifestation as The Poison Mother

Freyja in her manifestation as Menglöð:

Presents under the tree

In his book "Mushrooms and Mankind” (The Book Tree, 2003) the late author James Arthur points out that Amanita muscaria, also known as fly agaric, lives throughout the Northern Hemisphere under conifers and birch trees, with which the fungi —which is deep red with white flecks — has a symbiotic relationship. This partially explains the practice of the Christmas tree, and the placement of bright red-and-white presents underneath, which look like Amanita mushrooms, he wrote.

"Why do people bring pine trees into their houses at the Winter Solstice, placing brightly coloured (red and white) packages under their boughs, as gifts to show their love for each other … ?" he wrote. "It is because, underneath the pine bough is the exact location where one would find this 'Most Sacred' substance, the Amanita muscaria, in the wild."

Imelda Almqvist is an international teacher of shamanism and sacred art. Her book Natural Born Shamans: A Spiritual Toolkit for Life (Using shamanism creatively with young people of all ages) was published by Moon Books in 2016 and her second book Sacred Art: A Hollow Bone for Spirit (Where Art Meets Shamanism) will be published in March 2019.  She was a presenter on the Shamanism Global Summit in both 2016 and 2017 and is a presenter on Year of Ceremony with Sounds True. She divides her time between the UK, Sweden and the US. She is currently in the editing stages of her third book “Medicine of the Imagination: Dwelling in Possibility” and has started her fourth book "Evolving Gods: The Sacred Marriage of Tradition and Innovation"

I operate one dedicated admin day a week for my school and practice, generally Mondays but sometimes other days. On this day I try to respond to all messages received through this site. The other days I am largely off-line painting, writing books and new courses, or roaming The Wild as a Forest Witch. When I am teaching intensive courses I drop off-line altogether. - Please expect delays in hearing back from me!

My international teaching schedule no longer allows me to keep track of people expressing interest only in specific courses. If you would like to receive an occasional update from me (about 6 - 8 times a year) in the form of a newsletter offering "soul food", articles, art videos and an up-to-date (international) listing of all upcoming courses and events - please drop me an email on imelda.almqvist@gmail.com. Courses and events generally appear in the newsletter before I manage to list them on this site. This will change as soon as I master the ancient arts of cloning myself and bilocation!